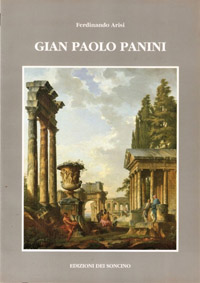 Giovanni Paolo Panini or Pannini (17 June 1691  21 October 1765) was a painter and architect, who worked in Rome and is mainly known as one of the vedutisti ("view painters"). As a painter, Panini is best known for his vistas of Rome, in which he took a particular interest in the city's antiquities. Among his most famous works are his view of the interior of the Pantheon (on behalf of Francesco Algarotti), and his vedutepaintings of picture galleries containing views of Rome. Most of his works, specially those of ruins, have a fanciful and unreal embellishment characteristic of capriccio themes. In this they resemble the capricci of Marco Ricci. Panini also painted portraits, including one of Pope Benedict XIV.