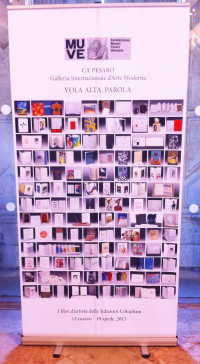 Since the experiments undertaken by the early 20th-century avantgarde movements onwards, artists’ books have gained the status of complex works of art in their own right, taking various forms and always of the greatest interest.

The publication of artists’ books by Edizioni Colophon, founded by Egidio Fiorin, began in 1989 with Quattro canti, quattro incisioni by Walter Valentini, based on texts by Giacomo Leopardi, and continued over the following years, drawing in major names from culture and contemporary art. To date, the catalogue comprises 103 titles, and of these a substantial selection will be on show at Ca’ Pesaro.

Alongside timeless classics and leading contemporary Italian poets, the authors include a wide range of exponents from the world of European culture, and many artists, who have all worked with the publisher over the past 25 years: Enrico Baj, Emilio Vedova, Enrico Castellani, Agostino Bonalumi, Mimmo Paladino, Lucio Del Pezzo, Giuseppe Maraniello, Jannis Kounellis, Pino Spagnulo, Ugo Nespolo, Piero Dorazio, Nicola De Maria and many more.