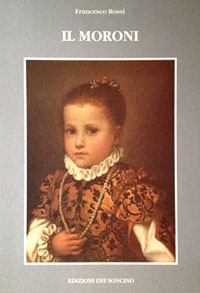 Giovanni Battista Moroni (c. 1520/24[1]  February 5, 1579) was a North Italian painter of the Late Renaissance period. He is also called Giambattista Moroni. Best known for his elegantly realistic portraits of the local nobility and clergy, he is considered one of the great portrait painters of sixteenth century Italy. The son of an architect, Andrea Moroni, he trained under Alessandro Bonvicino "Il Moretto" in Brescia, where he was the main studio assistant in the 1540s, and worked in Trent, Bergamo and his home town of Albino, near Bergamo, where he was born and died. His two short periods in Trento coincided with the first two sessions of the Council of Trent, 1546-48 and 1551-3. On both occasions Moroni painted a number of religious works (including the altarpiece of the Doctors of the Church for the church of Santa Maria Maggiore, Bergamo) as well as the series of portraits for which he is remembered.