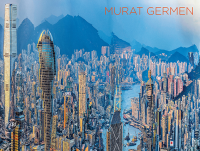 Murat Germen is an artist using photography as an expression and a research tool regarding urban metamorphosis. His challenging visual experimentations question specific dynamics of our city environments. Both the “Muta-morphosis” and “Facsimile” series focus on the perpetual transformation of cityscapes. While “Muta-morphosis” maximizes the urban content by shrinking very long panoramic photos into a frame in a traditional ratio, “Facsimile,” on the other hand, extends certain parts of cities to draw attention to particular dynamics among various urban components. In this context, it is possible to consider the “Muta-morphosis” series as a “broad” body of work, which focuses on the egalitarian aspect of all urban areas that form a city; while the “Facsimile” series is a relatively “narrower” body of work where certain urban areas disappear in order to make the hierarchy of cities more legible visually.